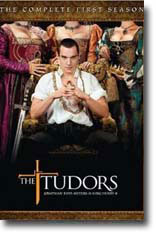 This is a dramatization and this is elegant popular entertainment. As an armchair historian, in love with the stories of Henry VIII, I find it absolutely gripping. The acting is for the most part marvelous, and the idea of doing these great personages as compellingly attractive people is a brilliant one.

There is plenty enough here to draw a person into good books about Henry and the English Reformation. One thing I do like very much is that Anne Boleyn is being presented as the complex woman she obviously was; and Catherine of Aragon has been presented with immense dignity and respect.

A serious study on the part of many as to what really went on when Henry broke with the Catholic Church, and when popular entertainment invites us to study, to learn more, as well as giving us delight, well, that is worth something. The portrait of Thomas More is excellent, and the actor playing Anne Boleyn’s father is quite remarkable.

In order to appreciate this program, you have to be willing to accept the show for what it is. Yes, the majority of the characters and plots in the show are based on real historical events, but this is a cable television series, and of course things are going to be changed to appeal to a larger commercial audience. As a result, all of the people in King Henry’s court are much more attractive than they probably were in real life, and there are some major alterations to historical timelines.

Still, I’m impressed that the producers actually did get so many things right with the show, and overall, it’s very engaging to watch. The pacing is exciting and fast…perhaps a little too fast, in my opinion. For example, Elizabeth “Bessie” Blount gets knocked up with Henry’s illegitimate child in the very first episode, and by the second episode, she’s already giving birth. I wonder how long “The Tudors” can realistically continue to air with such a rushed chain of events.