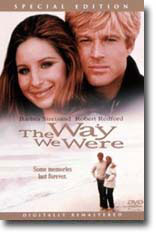 Screen legends Barbra Streisand and Robert Redford make movie magic as the captivating star-crossed lovers, Hubbell Gardiner and Katie Morosky. Theirs is a classic love story sparked by the attraction of opposites, played out against the backdrop of American life during times of foreign war, domestic prosperity and McCarthy-era paranoia in Hollywood.Gardiner and Morosky are sociopolitical opposites.

Gardiner is a WASP novelist, and she’s an activist. Nevertheless, the two strike up a romance in the 1930s, and have a rocky relationship through the next two decades that reflects much of America’s history.

An essential part of the movie is the Hollywood blacklist and the McCarthy witch-hunt years.  Morosky is a character that Barbra Streisand born play, and she delivers on all accounts. Fierce and determined, yet vulnerable and self-conscious, Katie is a tricky character and Streisand inhabits her so deeply that she seems nothing less than completely believable.

The Way We Were is different from most romances in that it is not death, feuding families, or any other societal phenomena that directly tear the couple apart. Gardiner and Morosky are simply passionate individuals with highly volatile, and contrasting, ideologies; the conflict of which is expressed in several brilliantly written and acted scenes that shimmer with the type of intelligence and honesty that is rarely seen in cinema today.

The film’s enduring popular success with the mass audience may very well be due to the magnetic chemistry between Streisand and Redford, the gorgeous cinematography, and the strong directorial hand supplied by Pollack.