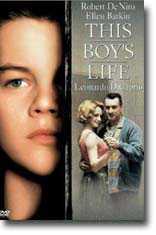 Robert De Niro gets top billing as Dwight Hansen, and young Leonardo DiCaprio is a revelation as Tobias ‘Toby’ Wolff. This Boy’s Life is an astute, often painful drama of growing up in the 1950s Pacific Northwest, based on the autobiographical novel by Tobias Woolf.Tobias, a good kid with a bad boy streak but an unwavering love for his divorced mother (Ellen Barkin). Tobias  claims, “I want to be a better boy.” From under a greasy pompadour, he tries to prove it.

When his mother marries Dwight, a single father who is a bully who parents through intimidation and humiliation. Tobias is full of anger, hope, and confusion as he drifts back to juvenile delinquency, and his intensity gives the true story of survival and triumph its charge. Dwight is frightening and pathetic, and his youngest daughter (Eliza Dushku) suffers from his emotional abuse as well as everyone else he is in relationship with.

The main strength of the film is Tobias Wolff’s story line. For much of the film, there is an inexorable feeling of Toby marching to his ultimate doom, not unlike one of those novels of the Victorians like Thomas Hardy. There is a sense that, no matter what he ever does, Toby is destined to become a desperate adult, trapped in Concrete and probably slowly drinking himself to death after his shift is over at the local factory.

The fact that Toby gets himself out of Concrete and away from his step-father, not to mention also saves his mother, is deeply hopeful. Even though the notes at the end of the film say that he was eventually expelled from the Hill School, it’s clear that he went on to make something quite impressive of himself, and that he did so in spite of all of the nasty stuff that went on during his formative years.