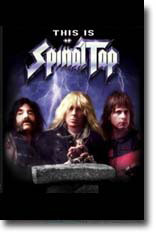 Director Marty DiBergi (Rob Reiner) solemnly alerts us to the glory that was Spinal Tap in his introduction to this “rockumentary” about the legendary British heavy-metal group, featuring lead guitarist Nigel Tufnel (Christopher Guest), lead singer David St. Hubbins (Michael McKean), bassist Derek Smalls (Harry Shearer), and a succession of drummers whose careers were cut short by spontaneously combusting on their stool, drowning in somebody else’s vomit, or otherwise perishing in untimely fashion.

Under DiBergi’s studious interrogation, the band and their familiars retrace the band’s evolution from head-bopping Mersey Beat poseurs to head-banging metal poseurs, each change in musical direction or tonsorial chic having little effect on the surviving trio’s sublime idiocy. For, as St. Hubbins (he’s the “deep” one, relatively speaking) sagely observes, “It’s such a fine line between stupid and clever.”

Happily for us, director Reiner, who developed the underlying story line with Guest and former Credibility Gap pranksters McKean and Shearer, stays squarely on the right side of the line, even as his writer-actors remain hilariously trapped on the other side. In lieu of a formal shooting script, the quartet created an extensive and detailed band history ripe with the sort of dead-pan detail that hard-core rock historians and screwball aficionados will savor on countless replays; with the three Tap members also musicians themselves, the “band” developed its stage act under the unsuspecting noses of L.A. club denizens, who accepted them as just as loud, flashy, sexist, and obvious as any other mullet-tressed, leather-garbed brigade of guitar slingers, circa 1984.

The resulting footage thus manages to lob its punch lines and build its characters (including some thinly veiled character assassinations of various industry folks) with a loose, tossed-away verve rooted in the improvisational approach. This Is Spinal Tap remains the funniest, and most truthful, look at rock culture ever filmed and a personal best for all involved.

You’re about to get personal with one of music history’s greatest and loudest heavy metal bands, Spinal Tap. Through interviews, rare footage and lots of music, including classic Tap tunes like “Big Bottom” and “Hell Hole,” you’ll get acquainted with the band. Be a part of the sights, sounds and smells of this celebrated heavy metal phenomenon. It’s an experience you’ll never forget.