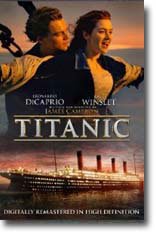 A bona fide pop-cultural phenomenon, Titanic has all the ingredients of a blockbuster with romance, passion, luxury, grand scale, a snidely villain, and an epic, life-threatening crisis. The film is a combination of absolute authenticity with a pair of fictional lovers whose tragic fate would draw viewers into the heart-wrenching reality of the Titanic disaster.

When the theatrical release of James Cameron’s Titanic was delayed from July to December of 1997, media pundits speculated that Cameron’s $200-million disaster epic would cause the director’s downfall, signal the end of the blockbuster era, and sink Paramount Pictures as quickly as the ill-fated luxury liner had sunk on that fateful night of April 14, 1912.

Titanic would surpass the $1-billion mark in global box-office receipts, win 11 Academy Awards including Best Picture and Director, launch the best-selling movie soundtrack of all time, and make a global superstar of DiCaprio.

Although some of the computer-generated visual effects look artificial, others–such as the climactic splitting of the ship’s sinking hull–are state-of-the-art marvels of cinematic ingenuity. It’s an event film and a monument to director Cameron’s risk-taking audacity, blending the tragic irony of the Titanic disaster with just enough narrative invention to give the historical event its fullest and most timeless dramatic impact.