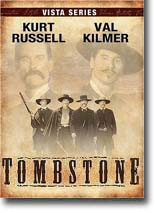 Tombstone is an exciting story about lawman Wyatt Earp (Kurt Russell) and his struggle to bring violators of the law to justice. The story begins with Curly Bill Brocuis (Powers Boothe) and his band of mercenaries, named the Cowboys, slaughtering innocent people at a wedding.

The next scene shows the protagonist Earp and his brothers Virgil (Sam Elliot) and Morgan (Bill Paxton) arriving in Tombstone, Arizona. The men hope to settle down with their wives and start a new life, this time without having to regulate the law.

Little do the Earp brothers know, they are going to have to uphold the law yet again in Tombstone. As soon as Wyatt arrives, he meets a long time friend and partner Doc Holliday (Val Kilmer). The two start talking about their past travels, and it is implied that Holliday has tuberculosis, a disease which was fatal in that time period.

Holliday also informs Earp that a group of viscous outlaws named the Cowboys run the town of Tombstone, and they have been asserting their will over the helpless villagers. Earp goes home, and the audience finds out that Earps wife Allie (Paula Malcomson) is addicted to a medicine called laudanum, which is a mixture of morphine and opium. Earp, distressed by his wife problem, begins an affair with a traveling actress named Josephine Marcus (Dana Delany).

This is one of the most entertaining westerns ever made and as such, ranks right up there with Eastwood’s The Unforgiven. It is a story of changing times that haven’t quite changed enough. Russell gives his best performance as Earp, coming to Tombstone to face the The Cowboys and a young gunslinger named Johnny Ringo (Michael Biehn).

Delany is radiant as Josephine, the actress Wyatt falls for even though he is married. Wyatt’s marriage is not the stuff dreams are made of, but Josephine is. The film takes its time as Wyatt and his brothers are slowly drawn towards the history we have come to know, and the aftermath we may not.

This is a multilayered story more faithful to the truth than most versions. What makes this film superior to other westerns is the depth of the story and the realistic performances of the cast. The finest of the aforementioned is Kilmer’s extraordinary turn as Doc Holliday.

This film more realistically portrays the relationship of Holliday and Wyatt than any other film. Kilmer’s Holliday is dangerous and intelligent, and above all, loyal to perhaps his only real friend in life, Wyatt Earp. Kilmer so became the real Doc Holliday that it was said he remained in character on the set at all times, even when the camera was not rolling. His performance is something that will always be remembered by anyone who watches this film.