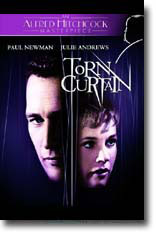 In Torn Curtain, Paul Newman plays cold war physicist Michael Armstrong, while Julie Andrews plays his lovely assistant-and-fiancée, Sarah Sherman. Armstrong has been working on a missile defense system intended to make nuclear defense obsolete, and naturally both sides are very interested. All Sarah cares about is the fact that Michael has been acting awfully fishy lately.

The suspense of Torn Curtain is by nature not as thrilling as that in the average Hitchcock film, much of it involves long pauses wondering if the bad guys are getting closer. Still, there is some beautifully clever camera work and an excruciating sequence that illustrates the frequent Hitchcock point that death is not a tidy business.

One of the more interesting characters in this film is Gromek, a German agent. He is also one of the most likable villains Hitchcock ever put to film. He throws about American jargon in wonderfully broken English while smacking on a piece of gum. Very sinister and funny at the same time, and the scene of his death definitely belongs in the Hitchcock highlight reel.

There are some amazing scenes in this film, gorgeous cinematography, stunning action scenes, a great chase and tension everywhere. This was Hitchcock’s 50th film and certainly was one of the last truly good films he directed in his illustrious career.

His superb knack for creating suspense and tension is evident from the first frame and makes for a terrific piece of film making. Once the story gets going the pace and suspense never lets up as the main characters move from Norway to Copenhagen to East Berlin behind the Iron Curtain, hence the title.