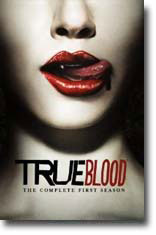 Alan Ball’s True Blood series works well for television, as it has enough sensationalism to tantalize and enough story girth to make the viewer care about the characters. That one can finally invest emotion into monsters, including an undead Civil War victim, a transformer who can shapeshift into various animals, and a female mind reader, speaks volumes about America’s willingness to accept fantasy.

Of course, television has always produced good fantasy shows (I Dream of Jeannie), but True Blood’s Southern Goth brand of fun horror is more macabre and more perverse, not to mention gorier, than most shows of its kind to date. Adapted from Charlaine Harris’ Sookie Stackhouse novels, True Blood thrills because of its equal blend in each episode of erotica, humor, tragedy, mystery, and fantasy.

Set in a rural, swampy Louisiana parrish, the show centers around Sookie Stackhouse (Anna Paquin) and her clan, sweet grandmother Adele (Lois Smith) and air-headed brother Jason (Ryan Kwanten). Illicit love is spawned early on, when Sookie saves vampire Bill Compton (Stephen Moyer) from having his blood stolen in the parking lot of Merlotte’s diner, owned by Sam Merlotte (Sam Trammell) who completes what will form a complex love triangle.

As tensions between Sookie’s suitors loosen or tighten, many side plots, such as her African American best friend Tara’s (Rutina Wesley) struggle with an alcoholic, Bible-thumping mother and her brother’s dangerous crush on drug addicted hippie, Amy Burley (Lizzy Caplan), keep one wondering who will succeed in this podunk place.

The main tension throughout, however, is a race war waged between vampires and humans. As murders of “fang bangers” occur (human girls who let vampires bite them) and dumb policeman Andy Bellefleur (Chris Bauer) fails to find clues, one sees the metaphorical implications of vampirism and feels deeper resonance with what can be a downright trashy show.

Gossip galore, especially about what kinds of babies interbreeding will produce, is rampant. One of the funniest characters is Tara’s flamboyant cousin, Lafayette (Nelsan Ellis), who deals drugs, works as a fry cook, and services the local white politicians, while making sure he’s always up in everyone’s business.

What makes True Blood smarter than pure soap opera is the parallels it draws between its monster mash and actual, familiar societal problems. Sookie and her friends watch the news, where Evangelicals bash vampires and prohibit mixed marriage, and everyone is addicted to V, a.k.a vampire blood, that effects like psychedelic heroin.

Even its gore reflects a mix of serious and silly, as vampires explode into red, sticky goop. Though it may not be attempting to qualify for the best vampire footage ever shot, True Blood is as addictive as that substance the town’s youth obsesses over, which is a metaphor in itself.