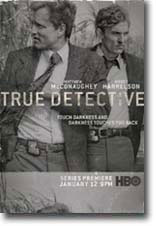 HBO premieres a new drama series, True Detective, this season focusing on Martin Hart (Woody Harrelson) and “Rust” Cohle (Matthew McConaughey), two detectives and former partners who worked in Louisiana’s Criminal Investigation Division in the mid-1990s.In 2012, for reasons not immediately revealed, the two are interviewed separately by investigators about their most notorious case: the macabre 1995 murder of a prostitute by a possible serial killer with disturbing occult leanings. As they look back on the case, Hart and Cohle’s personal backstories and often-strained relationship become a major focal point.

Hart, an outgoing native Louisianan and family man whose marriage is being frayed by work stress and infidelity, is (at least on the surface) the polar opposite of Cohle, a lone-wolf pessimist and former narcotics detective from Texas. While the plot is moved forward by their shared obsession to hunt down the ritual killer, the true drama centers around the mercurial nature of Hart and Cohle’s relationship and personalities, and how they affect each other as detectives, friends, and men.

This is not an ordinary cop show. It isn’t about tidy cases, chasing perps or trailing leads. There isn’t red tape, standard procedures or closure at the end of the day. What you will find is broken marriages, darkness inherent in the human soul, and philosophical notions on the meaning (or lack thereof) of life.

McConaughey and Harrelson as Rust Cohle and Martin Hart make an unlikely and surprisingly fascinating duo. Cohle is a dark, abstract individual, living alone, full of loss and discontentment with life. He has visions and hallucinations from his 4 years undercover in narcotics. However he is also very smart, rational and lucid, understanding who he is as a human being and his place in the universe.

Hart is a seemingly responsible, everyday family man that takes his job seriously. He has a good heart, but through his need for control, manipulates people to his own selfish and destructive ends. They are both dark, bad men. But as Cohle says, “The world needs bad men. They keep the other bad men from the door.” There is a yin/yang, religious/atheist, rational/irrational relationship that is both thoughtful and humorous to watch.