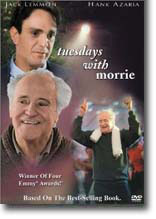 Based on a true-life story, Tuesdays With Morrie is a loving memoir to a man whose lessons on life have much to teach us about ourselves. Jack Lemmon delivers an outstanding performance as Morrie Schwartz, the Brandeis University professor upon whom the best-selling book is based. Hank Azaria plays Mitch, an accomplished journalist so driven by his job, he has little time or energy left for anything else.

One night, Mitch happens to catch Morrie’s appearance on a national news program and learns his old professor is battling Lou Gehrig’s disease. After the telecast, Mitch contacts Morrie, and what starts as a visit turns into a pilgrimage as Mitch opens his heart to the lessons Morrie has to teach him.

As the bond grows between these two men, Mitch learns that professional commitments don’t mean anything without the love of family and friends. Sure to inspire, Tuesdays With Morrie may just change your views on the meaning of life.