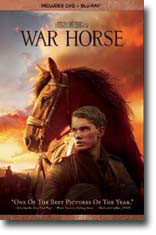 From legendary director Steven Spielberg comes the epic adventure War Horse, a tale of incredible loyalty, hope, and tenacity. Based on the Tony Award-winning Broadway play, and set against the sweeping canvas of World War I, this deeply heartfelt story begins with the remarkable friendship between a horse named Joey and his young trainer Albert. When they’re forced apart by war, we follow Joey’s extraordinary journey as he changes and inspires the lives of everyone he meets.

The sheer physical beauty of the horse and the magnificent landscape of rural Devon, England, makes the first section of War Horse a feast for the eyes, as stalwart young lad Albert (Jeremy Irvine) struggles to channel the high-strung energy of newly bought horse Joey into plowing a rocky field.

A destructive rainstorm forces Albert’s father (Peter Mullan to sell Joey to an army captain (Tom Hiddleston) who takes the horse into the battlefields of World War I. From there, turns of fortune lead Joey into the hands of a German private, a French girl and her grandfather, and then into the cratered no man’s land between the warring armies.

Some moments are over-the-top while others are elegantly understated It’s impossible not to have moments of empathy with the trials of this beautiful animal and the movie is unquestionably compelling and visually stunning.

As I saw it, the horse is a metaphor for hope and how it can be shared and spread, how it can inspire and endure. I don’t mean this in an over sentimental way but just in a very real way. We are all hopeful for different things, big and small, and this film is about how under the right conditions and with the right persistence that hope can avoid being snuffed out or lost.

The film, based on a play I have not seen and cannot compare it to, is episodic as the horse goes from owner to owner during the years of World War 1. The fact that the film was episodic didn’t make it feel chopped up or give it the feel of a broken narrative. I felt the through line of the film was the human condition and the traveling horse facilitated the telling of several viewpoints while exploring the excellent recreation of a time period. The acting was top notch by everyone seen on screen.