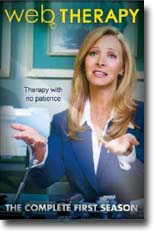 The popular online show, now a television series, features Fiona Wallice (Lisa Kudrow) who is branching into a new type of therapy. She decides that 3 minutes over web cam is better than 50 minutes of patients “rambling on.”

By dramatically shortening session time, she hopes to get results more quickly. Her sessions take place via web cam over the Internet and are taped in the hope of attracting investors into promoting her new technique as a worldwide therapy option.

As expected, Kudrow is both dismissive and self-involved when dealing with both her patients and her loved ones. Each of the ten episodes within Season One has 3-4 computer interactions (few of the actors share actual scenes together in person). Some of these sequences are straightforward therapy, some involve her family, some involve her efforts to fund the new business, and some are more personal in nature. There is a continuing storyline throughout the season, but much of the material can stand alone.

Part of the show’s hook is that it is improvisational in nature. The actors are coming to their roles without set scripts and that keeps things lively. Kudrow has backed herself with plenty of familiar faces including Bucatinsky (as an illicit romantic interest), Rashida Jones (his new fiancee), Victor Garber (Kudrow’s husband), Lily Tomlin (her mother), Jennifer Elise Cox (a daffy co-conspirator) and guest stars like Jane Lynch, Courteney Cox, and Steven Weber.

Everyone seems game to spar with Kudrow, but some are definitely more successful at the experiment than others. At times, I don’t know that the expanded time format has added much to the show. The webisodes were so quick and lively that when something stalled, it was quickly over.