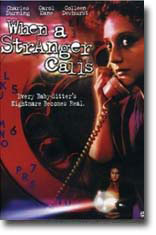 The first depictions of supernatural events appear in several of the silent shorts created by the film pioneer Georges Méliès in the late 1890s, the best known being Le Manoir du diable, which is sometimes credited as being the first horror film. Since the beginning of horror flicks, there has probably never been a more suspenseful and nail-biting section of film as the first half of the original When a Stranger Calls.

Released a year after John Carpenter’s 1978 Halloween, this thriller by longtime actor-turned-director Fred Walton has held a strong following of its own. In an exemplary piece of suspense, the film begins with a babysitter (Carol Kane) fielding threatening phone calls while on the job. She soon finds that a pair of children in her charge have been threatened; she is nearly killed herself by the homicidal maniac before police arrive.

As with Halloween, the action jumps some years ahead after this climatic beginning, when Kane’s character is herself a wife and mother–and the monster escapes from a mental institution to re-create his original carnage in the heroine’s own home. No longer a naive girl though still terrified but prepared she moves boldly to thwart the maniac’s attack in scenes that culminate in a nerve-shattering conclusion. Between these exciting bookends, the film becomes obscure, but the first half compensates by engineering numerous great horror moments worth savoring.

Scared, she calls the police, who at first tell her to calm down, then instruct her to try to keep the caller on the line if he calls again, so the call can be traced. When she obliges and they trace the call, the real terror starts. I remember when I first saw this film, and my reaction to this revelation was unparalleled by any film I had seen at that time.