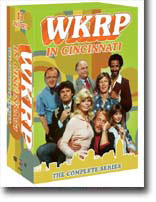 With the help of saner employees such as Bailey Quarters; the rather shy journalism major; Jennifer Marlowe, the beautiful receptionist who is the very opposite of a stereotypical “Dumb Blonde” and Andy Travis; the studly program director, Carlson tries gimmick after crazy gimmick to bring money into the station and make it a success. So sit back and enjoy the sound of uproarious laughter as you watch all episodes of this iconic series.