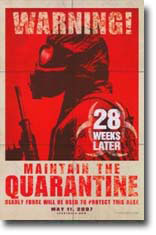 Zombie movies have suddenly become highly respectable in the field of counseling psychology now that Harvard Professor Steven Schlozman has become a fan. Actually, Schlozman, a psychiatrist by trade, has actually long been a fan of zombie flicks and their respective place in psychology.

An avid sci-fi and horror fan, especially if there’s zombies involved, Schlozman is considered he world’s leading authority on the neurobiology of the living dead. He even published a counterfeit medical journal article on the zombie plague, which he called Ataxic Neurodegenerative Satiety Deficiency Syndrome.

Schlozman’s venture into necro-diagnostics began when he gave a lecture entitled “Science on Screen” at the Coolidge Corner Theatre in Brookline, MA. The lecture series is based on Schlozman’s extensive research, which included interviewing George Romero, and studying zombie genre literature and memorabilia.

Those who have seen Schlozman’s lecture have commented that is fascinating and humorous. Amid the occasional joke is a serious science lecture that provides a map of the human brain, using the living dead as a narrative metaphor. Schlozman discusses how each region of the brain is affected if you are unfortunate enough to become a zombies, including the frontal lobe, the amygdala and anterior cingulate cortex, the cerebellum and the basal ganglia, mirror neurons, and the ventromedial hypothalamus.

Not surprisingly, the brain-related activities that are most seriously affected by becoming a zombie are executive functioning, impulsivity, and hyper-aggression. Additionally, Schlozman claims that, based on the lack of certain degenerative qualities, the zombies is certain movies are unrealistic. As an example, he questions whether the infected in 28 Days Later should actually be classified as zombies because they exhibited too high a level of cortical function. He also pointed out that the cerebellar degeneration in the zombie brain would make impossible the level of dexterity and coordination that the counterfeit zombies in 28 Days Later had.

The Cinema Therapy questions about zombies, counseling psychology, and neurobiology abound and are complex. What does it mean to become a zombie? How does in affect one’s characters? Your decision making process? How do you view your friends and having them for dinner? Life can be overwhelming enough without having to worry about being infected with zombyism.