It was a choral rendition of Journey’s “Don’t Stop Believing” that first put Glee on the map, the thrilling end to an intriguing pilot episode. After the full season began airing that fall, Glee became the most talked about show on TV, a musical-comedy-drama of colorful characters and soaring production numbers. Will Schuester (Matthew Morrison) […]

This is a story about the tumultuous relationship between two co-working journalists, Dan Hanson (Bacon) and Lorie Bryer (Perkins). The story of their budding romance is told twice; once from each of their perspectives. In keeping with the point of view of each gender, the man’s story was directed by Ken Kwapis and the woman’s […] 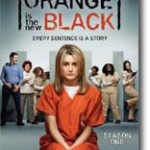 Piper Chapman (Taylor Schilling) is a public relations executive with a career and a fiance when her past suddenly catches up to her. In her mid-30s she is sentenced to a year in a minimum-security women’s prison in Connecticut for her association with a drug runner 10 years earlier. She is sentenced to fifteen months […]

Armed with a licence to kill, Secret Agent James Bond (Daniel Craig) sets out on his first mission as 007 and must defeat a weapons dealer in a high stakes game of poker at Casino Royale, but things are not what they seem. Bond is up agfainst Le Chiffre (Mads Mikkelsen), a banker to the […]